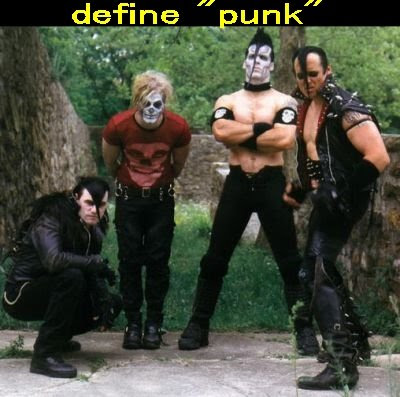 "Punk is guitar and drums only. No electronics, organs, or any other instruments."

"Punk is the Ramones and the Sex Pistols and similar music ONLY."

"Punk never includes influences from any other type of music."

"Punk rock must be distributed on vinyl records ONLY, never on CD."

Have you ever heard any of this lame ass shit? Well, if you have attitudes like these, you won't like this blog, and we don't care. To limit punk rock to a simple restricted formula, that's easy for you to imitate, is a dumb way to be. People who restrict punk to their personal tastes is a sign that they don't get out much, and have little historical insight.

Who was the first punk band?

If you say The Ramones or the Sex Pistols, I'm sorry, but you're wrong. Before them, there were the Fugs, the MC5, the Runaways, the Plastercasters, Iggy Pop and the Stooges, and Frank Zappa and the Mothers of Invention. To name just a few early pioneers.

New York City has always been proud of local band Suicide, the team of Alan Vega and Martin Rev, who had a synthesizer-based minimalist sound with rockabilly styled shouting and whooping.

A better definition of punk rock might be "anti-rock star, anti-authoritarian raw and real music." We don't think it necessarily has to be simple, amateur, or lazy music. Perhaps you can tweak our definition. We'd love to hear how you define "Punk".

When you try to limit a genre of music to a few "rules" that match your personal taste and abilities, you make a fool of yourself and show how shallow your understanding is. Punk songs often proclaim the virtues of anarchy. You can't be anarchy, then turn around and impose silly childish rules on punk rock.

"Punk" can be applied to anything that rebels against tradition, racism, fascism, conformity, commercialism, sexism, imitation, leadership, and hierarchy.

Several years ago I was in an underground record store having a discussion with some younger punk rockers. I mentioned how I had recently listened to a Canadian radio station that played hours of French punk rock. Most of the French punk bands made liberal use of Farfisa organs and synthesizers, without being technically "new wave" or "pop punk".

The young guys were in strong opposition to this idea.

"Punk is drums and guitar only, " they declared. "No electronics. No organs."

I asked "Do you plug your guitar into an amplifier?"

"Yeah, of course," they replied.

"Then you make electronic music," I chortled triumphantly. "Your amplifier is electronically altering the so-called pure guitar sounds."

I understand the wish to keep a genre of music as authentic as possible.

That's why we at the NYC Punk Rock Evolution Foundation refuse to post any Pop Punk and very little New Wave/Punk. We don't like "mall punk" or "emo grunge". You know exactly what bands we have in mind.

But if someone wants to include Mall Punk, Pop Punk, New Wave Punk, Emo Grunge, or Nu-Metal in their definition of punk, that's fine with us. They can start their own foundation and blog to advance their aesthetic theories and we wish them luck. It's just not our cup of green tea.

The NYC Punk Rock Evolution Foundation is devoted to showing fans the different paths and tangents taken by punk pioneers and current innovators, while honoring the classic punk bands. Sometimes the line is blurry between punk and speedcore, punk and goth, punk and jazz, even punk and folk.

Punk rock shares much with protest folk music, acid jazz, psychedelic garage bands, and even avant garde classical music, as such bands as Godspeed You Black Emperor and A Silver Mt. Zion have shown us. In those two bands, the music is a blend of orchestral and rock, but the singing and lyrics and politics are more punk-influenced.

So let's hear your thoughts on this matter.

While you're mulling it over in your mullet head, check out this great quote from the Artnoise blog, from a review of Present "A Great Inhumane Adventure" CD.

Ok, let’s get things straight here. I am a punk rocker. I like challenging music.

These things should not be mutually exclusive in the slightest and yet—after decades of punk commercialization, homogenization, and generalized petrifaction—the common understanding of what punk is has narrowed to the point that any substantial experimentation or reimagination of the oeuvre’s stylistic tropes has become tantamount to treason: punishable by exclusion from the proper scene and reclassification into other more sophisticated/trendy genres.

One of the great tragedies of underground music in the past thirty years has been the reduction of punk rock to a handful of anti-pop musical traditions specific to the mid-to-late 70s and early 80s; the popularity of this slander has brought about punk’s effective death as a living, dangerous artistic medium.

In terms of punk, this mess has brought about stagnation, increased irrelevancy, and eventually even perversion into the horrifyingly radio-friendly faux-punk schlock currently belted out over MTV2 and its various corporate affiliates.

In terms of my life, this has simply meant that in seeking out sounds that push against formal boundaries I’ve been forced to explore an ever-increasing amount of acts whose musical leanings place them outside the spectrum of my beloved punk upbringing.

Sometimes this exploration turns out to be immediately rewarding—yielding up a new musical front in the battle for the perpetual deconstruction and debasement of rock and roll—while other times I’m left with pieces that completely go against my preconceptions of what music can and should be about.